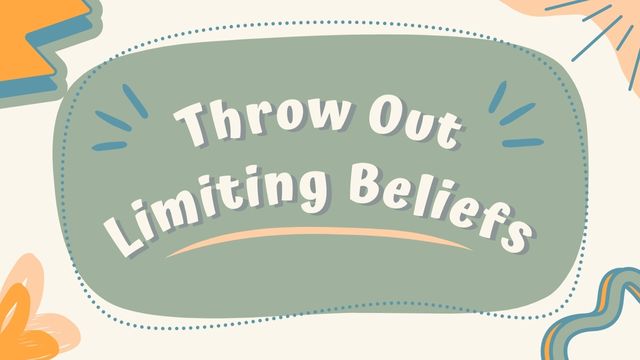 When taking on a big task, how many of us feel utterly overwhelmed and afraid? Whether it’s embarking on a fitness journey or pursuing a new career, goals can seem daunting.

“What if I’m not actually good enough?”

“I’ve never been able to do this before, so what makes now different?”

“What’s the point in trying, if I fail”

Reading those words in black & white feels different than how it feels to say them to ourselves. When I read those sentences, I want to shake the author and shout, “That’s just your imposter syndrome talking, love!” but I would be a total liar if I told you I’ve never thought those words about myself.

These are limiting beliefs, which are basically untrue thoughts we tell ourselves to protect us from any pain. People who have been deeply hurt by their goals, people, society, or any other previous experience are far more likely to suffer from limiting beliefs.

Lots of clients come to me with a fear or hesitance to begin coaching. And they’re usually afraid of failing due to their previous fitness and dieting experience. What they tried before didn’t work or they weren’t able to sustain the results they got.

The “burned before” mentality really only makes sense when we talk about dangerous experiences. Like when you lay your hand on a hot stove. Of course we won’t want to do that again! But when it comes to success and attempting to reach your goals, this sort of mindset doesn’t belong. There will always be some sort of risk! That’s a part of the process.

So how do we overcome the fear of beginning or restarting?

1. Identify the fear or limiting belief

Is it a fear of regaining weight? Not seeing a difference at all? Failing to remain consistent? What are you actually afraid of? Once you can pinpoint it, you can figure out a way to work through it!

2. Recognize that it is a belief, not a fact

So often our fears feel like facts, but they only are falsities we tell ourselves. Once we recognize that they are untrue stories meant to protect ourselves, we can let go of them!

4. Acknowledge the consequences of your limiting beliefs

How many opportunities have you missed out on? Has it taken you month’s to “begin again” after falling off the wagon? How are your limiting beliefs holding you back?

5. Replace it with a new belief

Think of the opposite and more positive belief instead. For example, if your limiting belief is, “I won’t be able to lose the weight because I have never been able to do it before.” Replace that belief with, “I have a clean slate and new tools that will help me become healthier.” It might be hard to believe this at first, but the longer you put it into practice, the sooner you will believe it too.

Unlearning these beliefs takes time, but with practice it truly is possible to free yourself. If you found this to be helpful, pass it along to a friend who you think could use it too!